Having delayed Budapest until the weather looked cooler, today was Budapest day. We set alarms to blast off early to go to Hungary for the first time ever. The dogs were allowed to swim in the lake before the journey to help keep them cool.

Leaving site we pulled into the service point and began draining our tank, a rather silly older German couple had decided to park their tiny converted van right next to the drain but then groaned very loudly when the smell hit them. Myself and a Neil couldn’t not laugh when Neil then proceeded to tip our thetford down the drain while they tried to continue cooking their breakfast on a camping stove less than 5 metres away. They must have been novices as no one would chose to park that close to the drain.

Trying to keep straight faces we said goodbye to our Bratislava camping friends and headed off to Budapest. Today’s drive was another hot one but it was beginning to cool down and we did not have far to go. We did also use the Tesco fuel Station to take advantage of the €1/litre fuel. 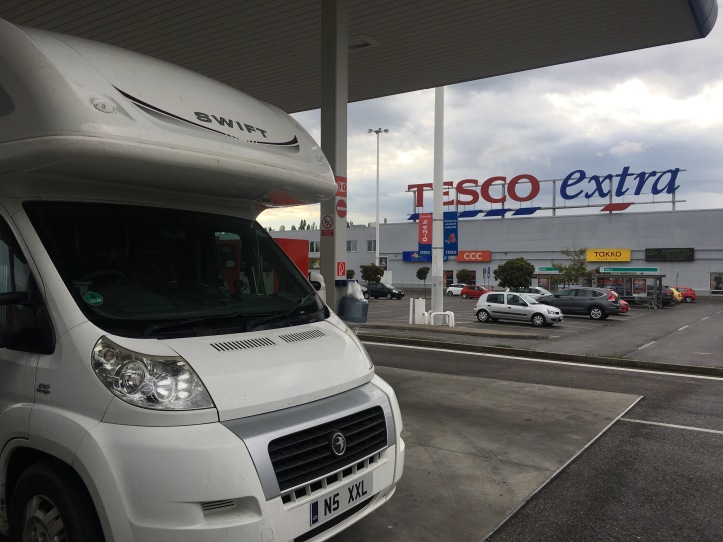 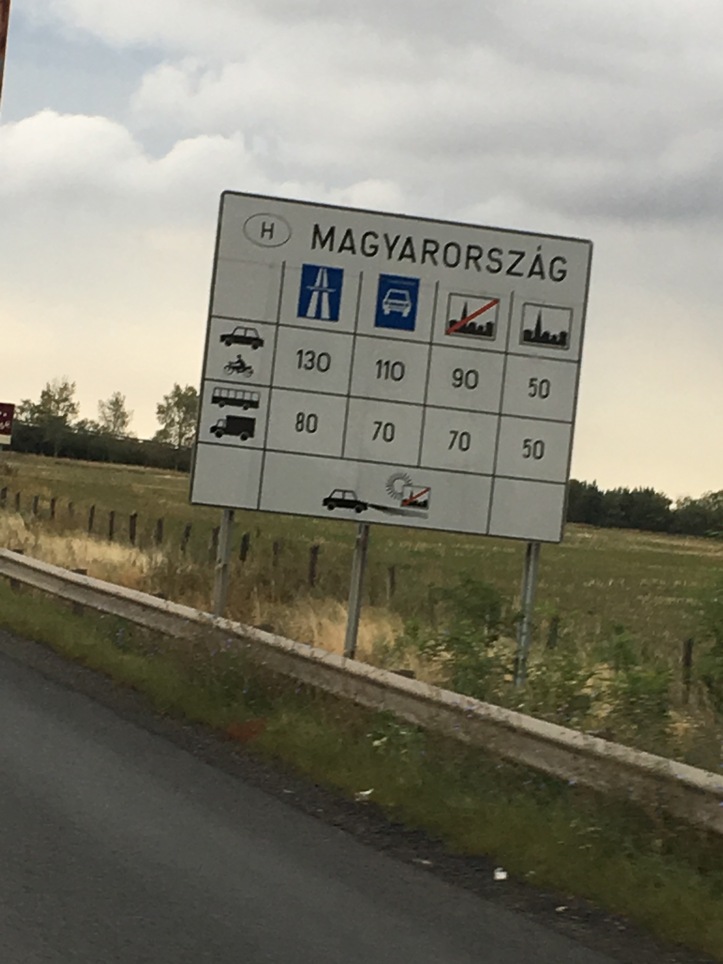 As we approached our planned camp we realised we had no local currency, we drove for about 15 mins looking for an ATM with no luck. Predicting the campsite would not accept card we eventually had to pull into a shopping mall car park and I was sent on a search for cash. Luckily a found an ATM right inside the door of the mall and after a debate in my head I went for 30000 Hungarian Forint, I felt really rich when the funny money dispensed but once back in the van I did a quick converter and realised it was only about £90.
We made it to our nice Budapest campsite by lunch and receptionist found us and walked us to a pitch in another one night only area, it was perfect. Flat, electric hook up, near facilities and a tree for shade, we pitched up and enjoyed lunch. 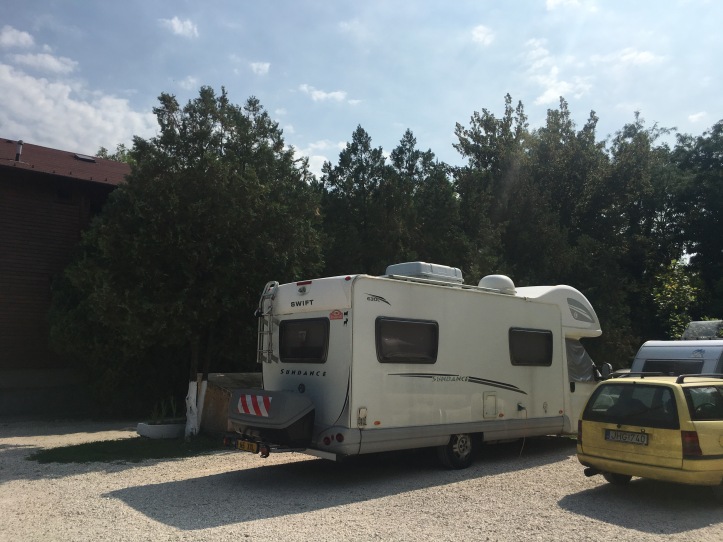 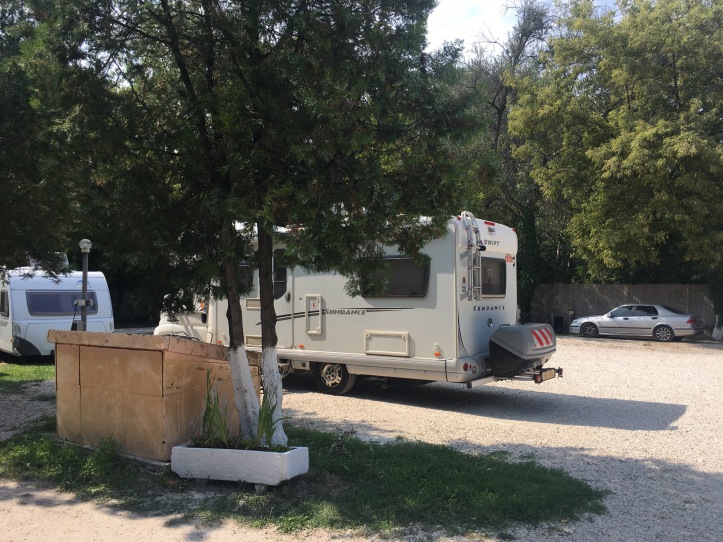 After lunch we walked the dogs round the block and had an ice cream from the local Spar shop then again confident the aircon would stay on we headed off to Budapest city.
The reception told us to walk to the bus stop then change onto the metro and kindly explained we should get a 24hour group ticket for €11. We found the bus stop and as a bus was coming I rushed to the ticket machine but nearly got hit by tram, I failed to see the un-barriered tram crossing and was inches away from death, I think it scared Neil more as he was watching it happen but couldn’t stop me. Lesson learnt, slow down!
A short bus ride found the metro station but we had no idea which metro to get! A quick google search and we were off on the underground and in no time were in the centre of Budapest.
We took a short look around but then decided to get The Hard Rock Cafe visit out the way early before it got busy with diners. We had a nice cocktail in a relatively big HRC and took some pics with memorabilia before heading to the shop to collect a glass. While in the shop a massive thunderstorm hit, the rain was torrential. Back to the bar it was for more drinks till it blew over. 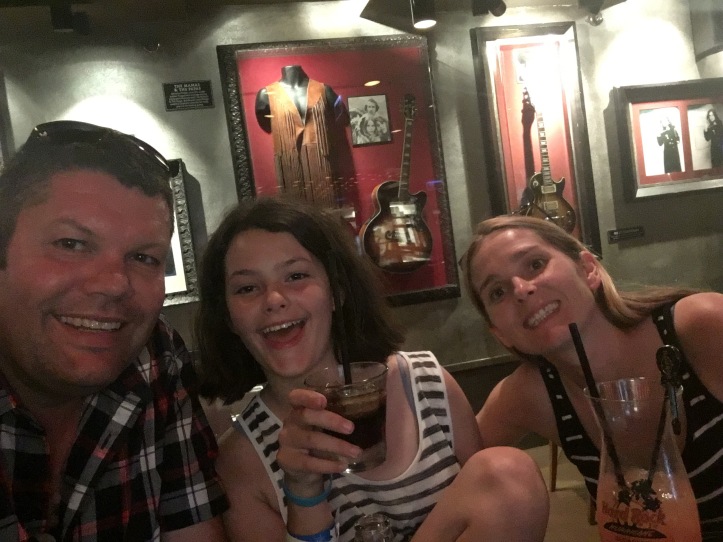 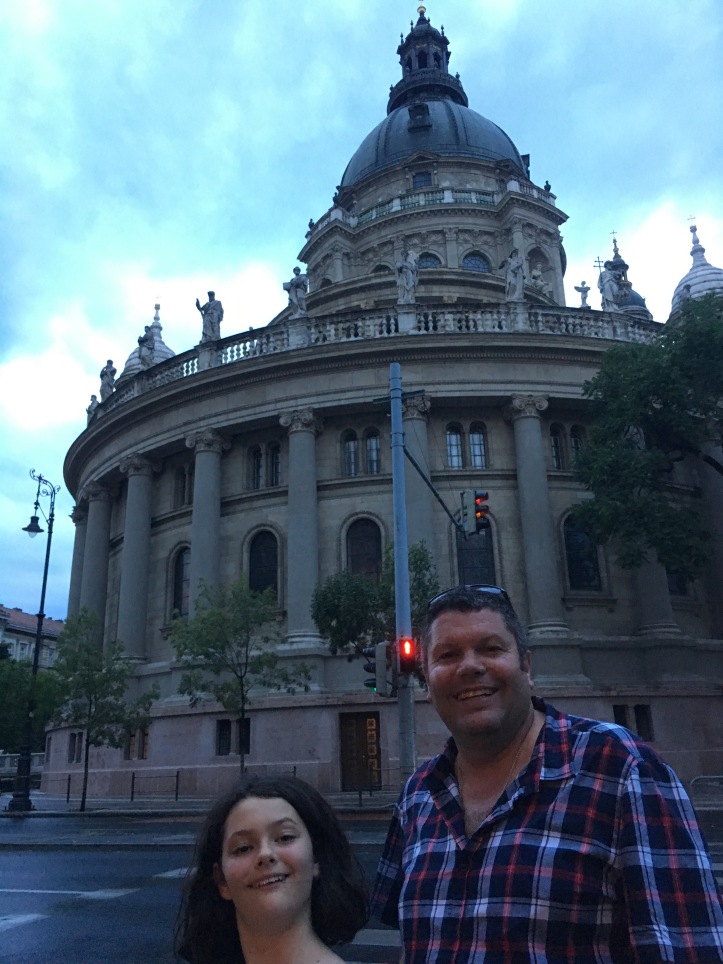 We were in the bar for what felt like an age, we kept sending Lucy back up to the door to take a look but she kept returning saying it was raining. She returned once to saying the rain had got lighter so that was our green light to run, by now we were hungry in Hungary and wanted to find somewhere for food. 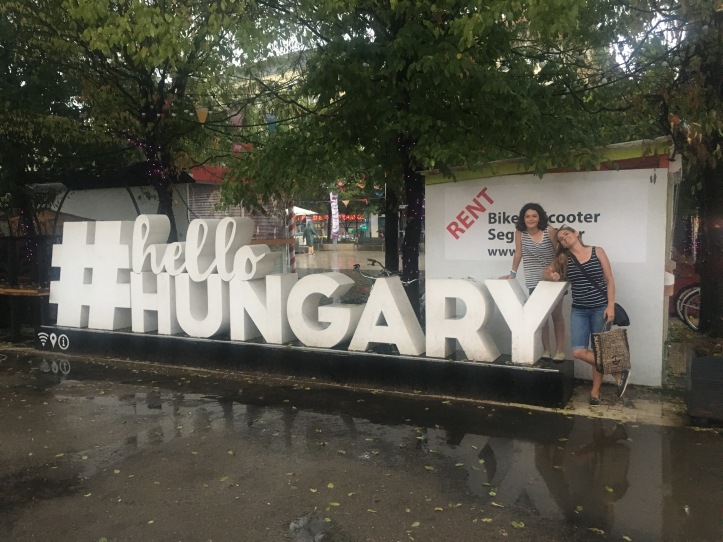 A quick dash across the city hiding in and out of door ways and arches and we found a steakhouse with cow print everything, in we went. The waiter sat us in a huge window table and we relaxed with nice beer and great food. Lucy was sooo excited when her steak arrived and she announced to the whole restaurant it was the best she’d ever had. 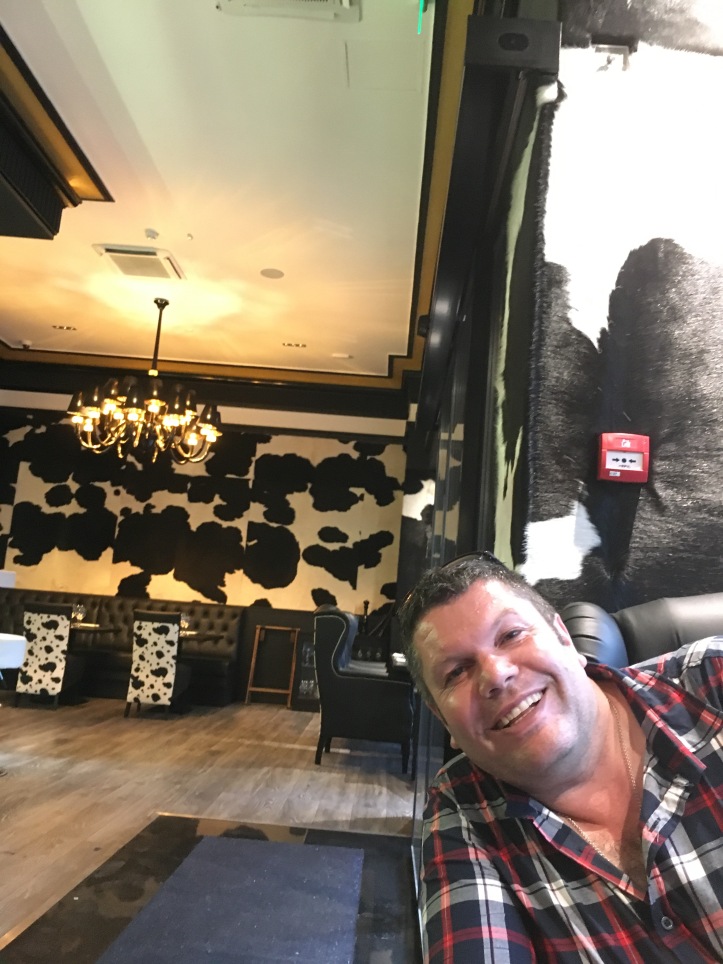 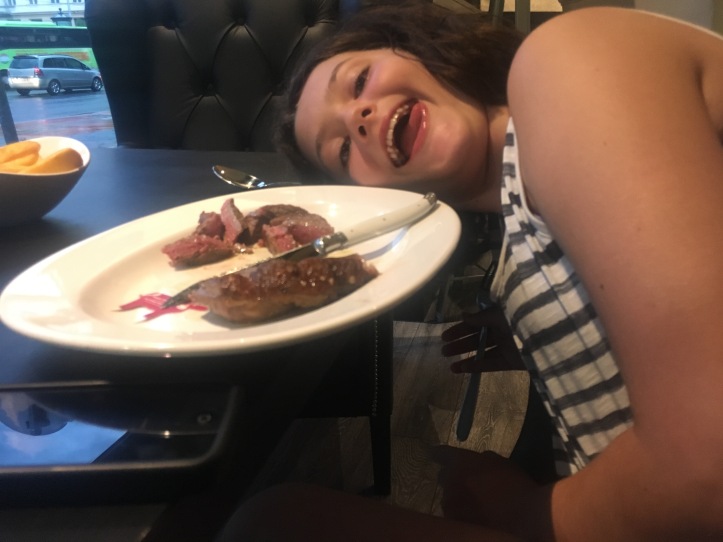 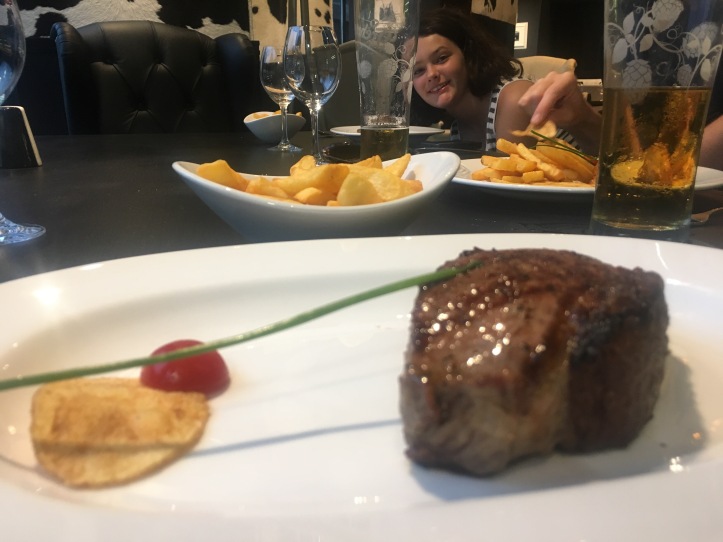 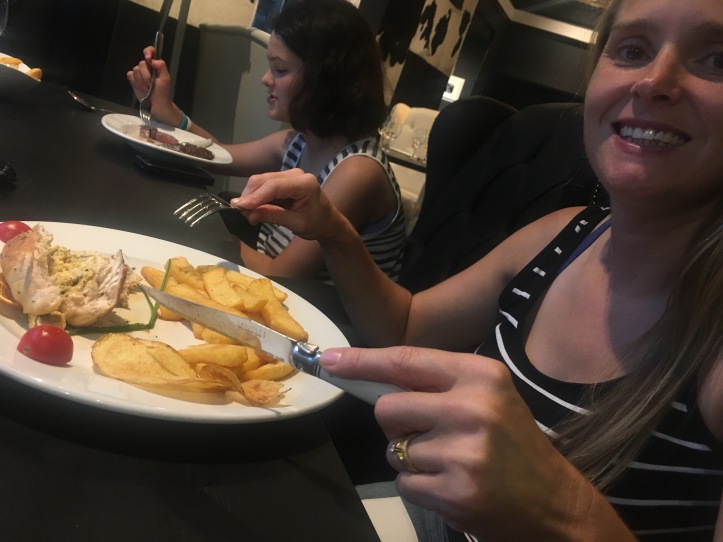 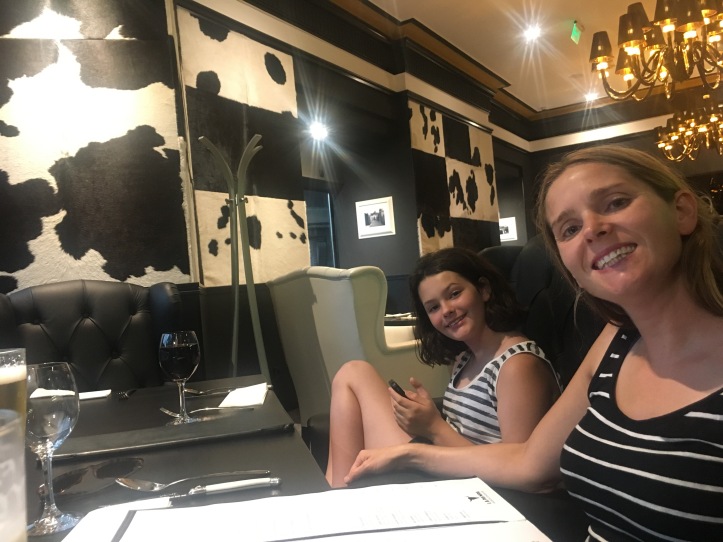 We continued to watch the rain during dinner then after as soon as we saw the rain ease off we left the restaurant to see a little more of Budapest. We spotted another Ferris wheel (The Budapest Eye), this seemed the perfect way to see most of Budapest in the short time we had. A very short queue and we were on, we didn’t notice the puddles in the seats as we sat down so three wet bottoms followed. The eye was good and after the 4th or 5th go round we were ready to get off.

As it began to rain again we rushed to a metro station, we thought we best head back to the dogs as the thunder on occasions had tripped the electrics. A smooth train ride then bus trip got us back to the van to find the dogs sound asleep oblivious to the weather.