From Augsburg we headed to Mainz, this was another unplanned destination but was in the right direction and looked quite good. 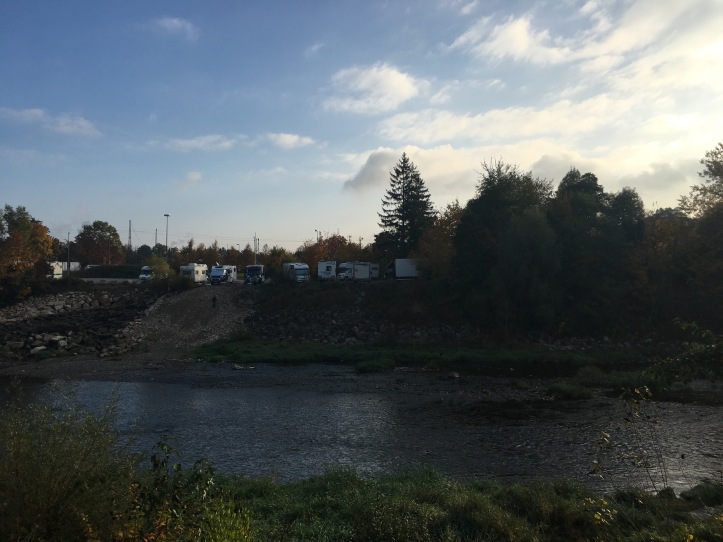 On route we spotted a Lidl type supermarket which was bound to have baguettes for lunch and cheap plastic bottled beer (which Neil doesn’t rate but we love) it also had a separate bakery where the lady refused to sell me 5 donuts but ranted at me to buy 4, I think they were on special offer and they were the biggest and best donuts ever with more sugar than donut.

Our tour has become a Weston shore tower block, Bundesleague tour with every stop over either being in a council estate tower block area or a football stadium carpark. As we approached the Mainz aire we were all a little nervous to be parking under the biggest tower block of all. The aire itself was in the corner of a large carpark and was fenced in with marked pitches. As we pulled up to the gate a very friendly German attendant greeted us welcoming us to Mainz, he walked us to our pitch and then explained to put our €10 fee in an envelope and post it in a box at the entrance, we’re not sure why he couldn’t take it but we followed his rules.

Mainz centre was a short fun walk away, the campsite had provided an easy to follow map which luckily took us passed a Woolworths. No pick and mix but otherwise same old Woolworths, it was like stepping back in time. I managed to buy a red bucket for a prize in a raffle I am organising for New Year, surely carrying a red bucket round for the rest of the night wouldn’t draw attention to me! The bucket did provide a few laughs every time I placed it under a table and then told people not to kick the bucket.

I had checked out trip advisor and one of the best restaurant in Mainz was called Hintz & Kuntz, I obviously wanted to go there even though I did not recognise anything on the menu- we found the restaurant but Pizza Hut was opposite and this had food we recognised.