5th August 2016
Our ferry was not due to depart till 11am but the paperwork advised check in closed 2 hours before so early an morning was required to be ready to leave site at 8am.

The ferry port was chaos, Vickey had received a text saying that check in should be done on the first floor of terminal 1 we had not received a text. Very unusual at a ferry port to get out of your vehicle to go in to check in but this was there way so we joined the queue. Lots of people, like us, obviously did not get the text about checking in and joined the vehicle boarding queue with no boarding passes, this caused entertainment for those of us who did have passes but added to the queues and chaos. 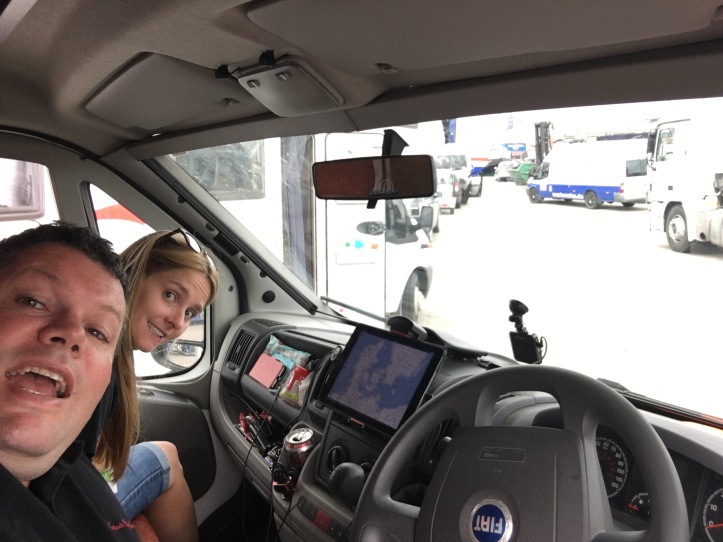 Once on board we gathered up our overnight belongings for the 24hour crossing and headed for the cabins. What joy followed, the queue for the cabin keys was worse than any previous queue. It was horrendous we were in a narrow corridor with two dogs, a picnic basket, clothing bags, wash kit, drinks, dog food, dog water, iPads and entertainment items and there we stood for over an hour moving a foot at a time.

Eventually we got our cabin and luckily for us we had an en-suite, our paperwork did not say this so we thought we were sharing as we were in the pet cabins but not so. Straight in and Dug decided to mark his territory and piddle in the corner of the room, obviously dogs had piddled here before. I was prepared for this and in my bag I packed a huge pack of antibacterial wipes and disinfectant, the floor was cleaner after us than before we arrived!

Dogs and toilet requirements was fun on the crossing, the ferry failed to provide any exercise area and the only thing they did provide was a puppy training pad for the dogs to go on in the room, this was not happening in the room where I would be sleeping! Neil did some investigating and discovered he could take the dogs on the open car deck to play and pee all was not a disaster. The dogs had company on the ferry and two other families had golden retrievers one was huge and made Rory look like a dwarf dog. 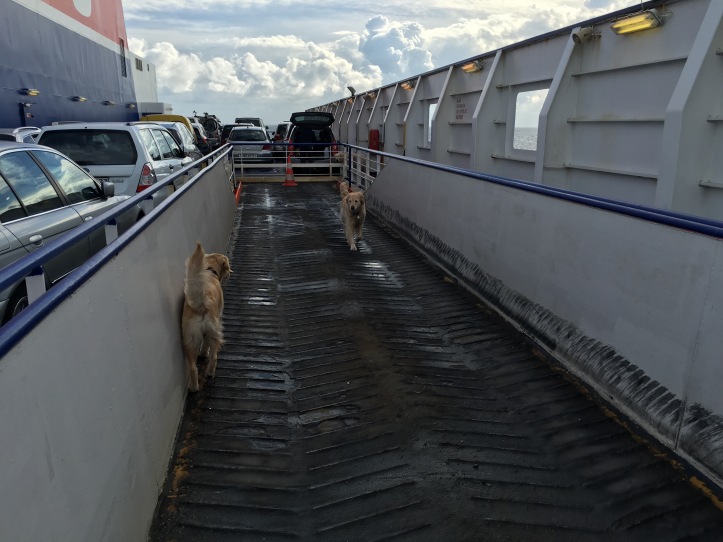 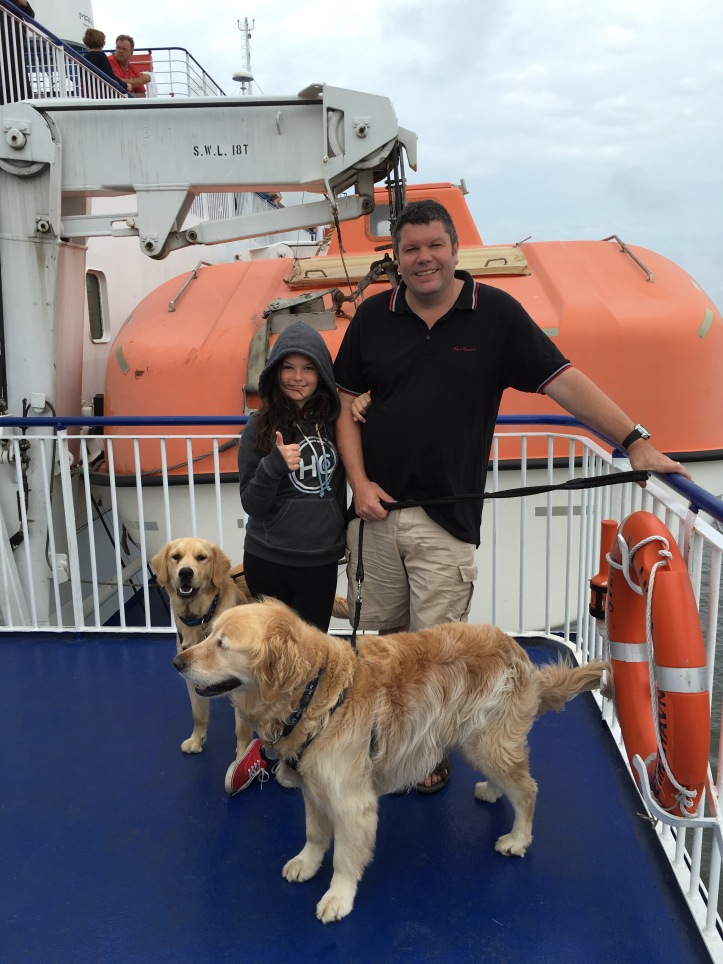 We occupied a sofa area of the ferry and our picnic commenced. We decided to have a cheese and wine party but at midday as we opened up the baskets for food an announcement came over the speakers advising the boat was operating to German time so it was in fact only 11am, we couldn’t start on the wine at 11am so cheese party it was.

After lunch who would decided to sit next to us, in fact nearly on top of Vickey our Dutch friends from the campsite! We listened for a few more hours about his wonderful life. 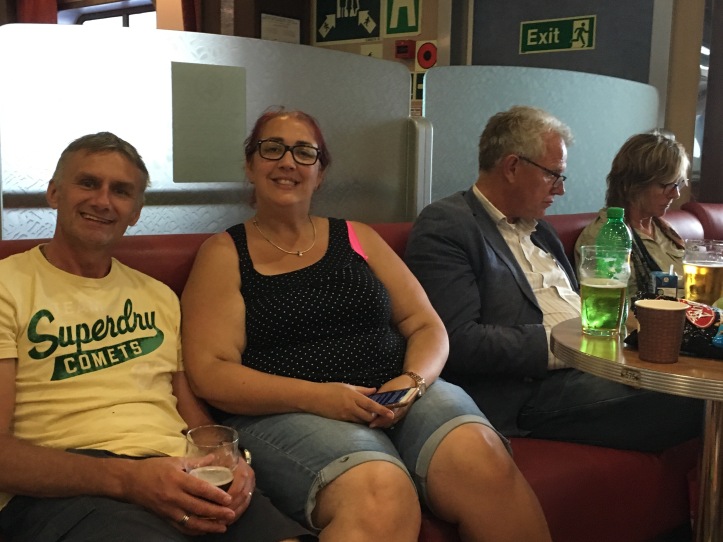 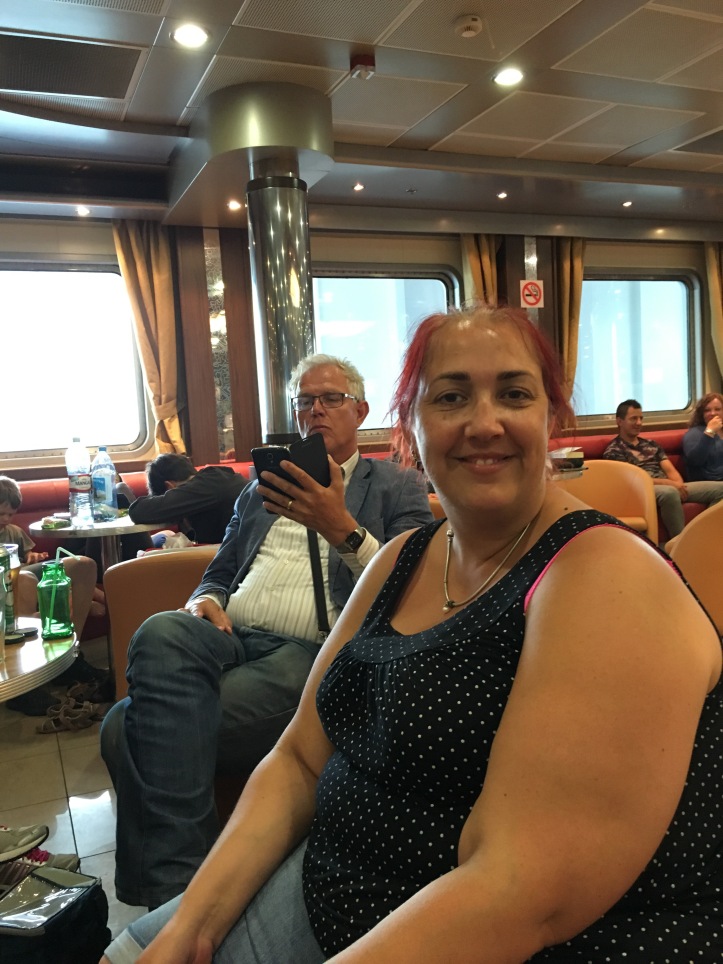 The kids all got excited when they saw a sign for kids area, their faces were a picture when they got there and it was a tiny soft play area that even would bore a 3 year old in minutes. Strangely it actually did entertain the kids all day and into the night. When Lucy finally came away from the area at 11pm a family promptly grabbed it to use for their beds for the night, Lucy was mortified and asked if they were homeless people.

We managed to stay in the bar for the whole crossing and watched as the barmen worked tirelessly helping people, I decided Vimjim a lovely young barman could come home with us as he smiled a joked the whole time while working his arse off. At one point when we needed to let the dogs out Vimjim was the only visible member of staff to be found on the whole ferry.

Dinner was interesting, having watched the lunch queue while we ate our picnic we knew we’d unfortunately have to queue for dinner. Some poor lunch people joined the queue at what they thought was 12 (advertised restaurant opening time), to find out they were still on Latvian time, they stayed in line for the hour! Weirdos.

We got in the queue for dinner hopeful it would be worth it. Vickey decided to let us go first and saved our sofa in the bar. After an hour or so in the queue we finally got into the self serve canteen restaurant. We collected our trays and started round the counter, the first thing was chocolate mousse type pudding, who would want dessert first. Next was sliced bread but no plates to put them on. Then followed two large glass barrels which poured drinks, I was very disappointed when what I thought was lager turned out to be apple juice.

There was three choices for main meals Latvian style chicken, pork ribs or beef stroganoff. We thought the food was going to be expensive and prepared for the bill but at €20 for three of us it was alright.

After dinner a singer set up by the bar, Neil had joked about the entertainment earlier in the day but we had no idea there really would be. The singer sang British and Ukrainian songs through into the early hours of the morning. He finished after several encores saying he was looking forward to seeing everyone again tomorrow night, I’m not sure he realised everyone on board had one way tickets! 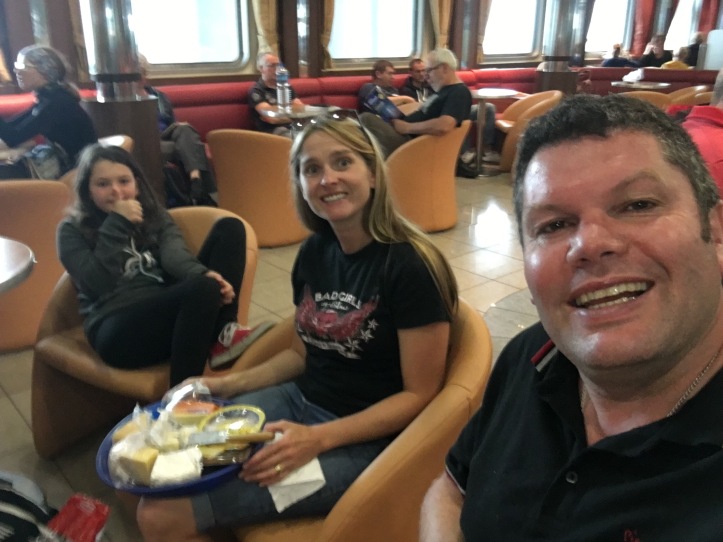 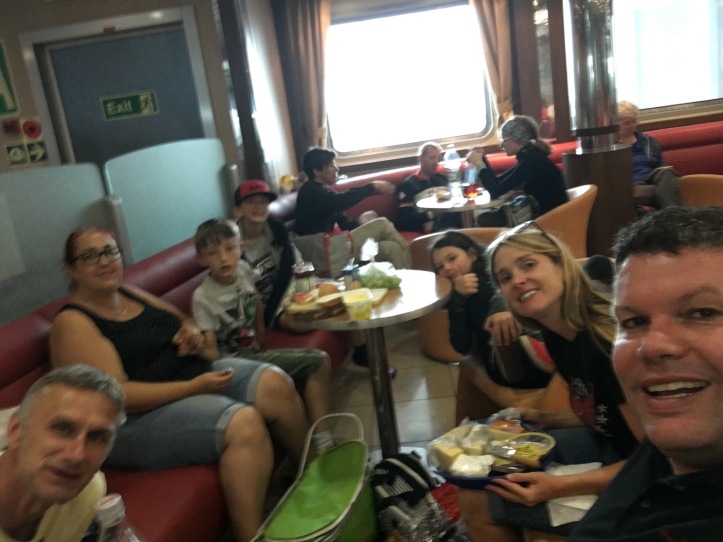 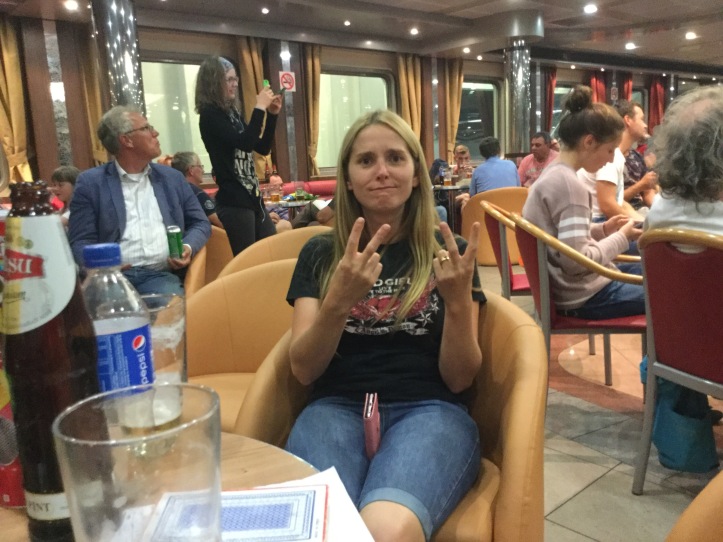 Our cabin was quiet and we fell into our beds for a good nights sleep.