We woke to glorious sunshine so opted for a short drive to spend the day in the sun.
Our neighbours had a lovely little Golden Retriever bitch so Neil suffered withdrawl symptoms, missing his dog.

We chose a campsite with facilities on the edge of another lake. If we’d known how steep the hill on arrival was we might have picked a different site. A little scrape went un-noticed as the campsite was nigh on deserted, luckily the back box took the brunt of the scrape and no real damage occured.

Neil sat on the ramp and announced he could not leave the van pirched so he sent me to the reception, Amy could not accompany me as she was still in PJs. Only slightly nervous I approched the reception sign and was relieved there was no-one there. We headed to the camping field to pitch ourselves. Only one other van in the field greeted us along with a very friendly gardener who spoke zero English but made an awesome effort waffling away in Italian.

We ate lunch out in the sunshine and then Amy and Garf braved the shower block before we took a stroll to find a town.

Leaving the site Garf took the lead and turned left, we walked along a motorway for a while and then found an area of two bars, an ice cream shop and sailing club. This was surely not the town!

Whilst Lucy sat eating an ice cream feeding the ducks Neil did some research and realised we should have turned right out of the site for the town. A quick drink and we were off again.

After another walk along the motorway we ended up in a sports bar full of men playing cards or on slot machines. Amy went to the toilet to find another hole in the ground, toilets in Italy are not the best 👎 Next we walked down the worlds biggest hill to the lakeside where we discovered the tourist area with kids rides and amusements- Lucy was kept amused.

As we left the amusements Lucy dropped her prize, a small bouncy ball which bounced straight into the lake. She burst into tears and as dramatic as possible threw herself to the ground. Trousers rolled up off into the FREEZING lake I went to retrieve it, mum is the best 👸

During our afternoon stroll we had spotted a restaurant which had €6 bolognese and €4 pizzas, this was dinner sorted. We joined the queue of locals at bang on 7pm opening time. Lucy was pleased with parma ham and Neil liked the fact a litre of wine cost the same as my pint of beer – night, night Neil and Amy!

After our meal we werent quite ready for bed so we walked along the motorway again and went back to the first town where we had seen an American nightclub which opened 5pm – 5am. We were greeted by more staff than customers but assured it would liven up later after 11pm, I dont think any of us believed we’d survive until then and our campsite gate was due to lock at 10pm.
Neil, Lucy and Garf had a game of pool then we headed back to bed.

Luckily the gate was still open when we got back and to our surprise the field had filled up. 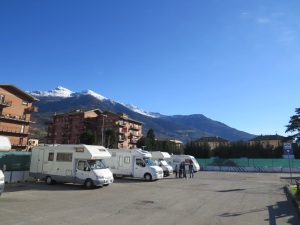 Our next XXL Tour will start onApril 10th, 2020
We're off again... Follow us in real time using via our Live Tracker Page